During the celebration, people wear red clothes, decorate with poems on red paper, and give children “lucky money” in red envelopes. Red symbolizes fire, which according to legend can drive away bad luck.

The lantern festival is held on the fifteenth day of the first lunar month. Some of the lanterns are plain works of art, painted with birds, animals, flowers, zodiac signs, and scenes from legend and history. People hang glowing lanterns in temples, and carry lanterns to an evening parade under the light of the full moon.

In many areas the highlight of the lantern festival is the dragon dance. The dragon—which might stretch a hundred feet long—is typically made of silk, paper, and bamboo. 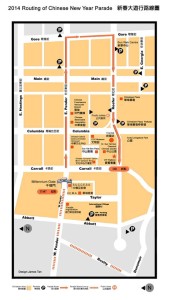 This year the annual New Year parade will happen in Vancouver’s Chinatown, over this weekend.

The 1.5 km parade route winds through Vancouver’s historic Chinatown; starting at the Millennium Gate on Pender Street (between Shanghai Alley and Taylor Street), moving east along Pender Street, turning south onto Gore Street, then west onto Keefer Street, before ending at Keefer and Taylor (click on the map to expand).

‘The Wood Horse year is a year full of true spirit, grit, determination, vitality and endurance.’

If you get hungry in Chinatown, make sure to visit Phnom Penh at 244 E. Georgia or New Town Bakery at 148 W. Pender. Very cheap foods, and sooooo good!