Crime and Law Enforcement in Vancouver

According to Canadian Medical Association, Winnipeg is the most violent city in Canada, with a whooping 145.4 Violent Crime Severity Index in 2013 (Vancouver is at 92.6, still above the overall Canadian rate of 81.4).

Overall statistics from the VPD. 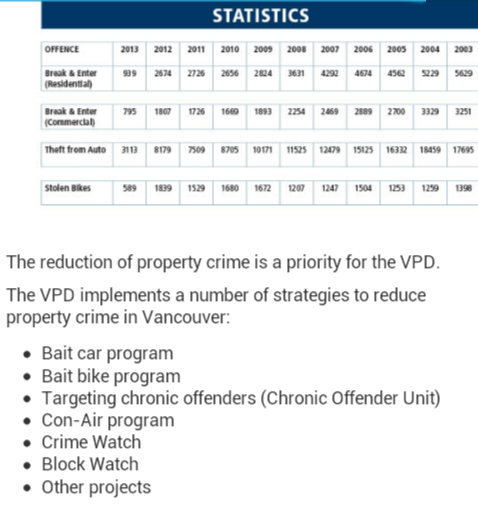 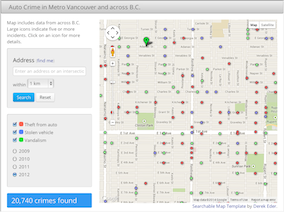 VPD has a page with the statistics of commercial and residential break and enters (a good tool to use when looking for a new apartment) and car break-ins. They can be found here.

Click on the image to the left to be redirected to Vancouver Sun’s page to see the map of auto crimes (e.g. auto break-ins, auto theft and auto vandalism). Another map groups the overall number of the incidents by the neighbourhood.

Overall statistics for Vancouver may not seem that bad; in fact, I think that RCMP and VPD are doing a kick-ass job keeping the streets safe. However, if you compare Vancouver’s statistics to Surrey (remember, technically these are two different municipalities).

Although it is illegal, Vancouver police generally do not arrest people for possessing small amounts of marijuana. In 2000 the Vancouver Police Department established a specialized drug squad, “Growbusters”, to carry out an aggressive campaign against the city’s estimated 4,000 hydroponic marijuana growing operations (or grow-ops) in residential areas. As with other law enforcement campaigns targeting marijuana this initiative has been sharply criticized.

From The Vancouver Sun Newspaper:

Vancouver was the first city in Canada to adopt a “four pillars” approach to harm reduction around drug use, including a law enforcement policy that focuses on public safety and street disorder rather than busting people for simple possession.

Montague said police need to put their scarce resources toward public safety and reducing street disorder, not go after dispensaries that are providing medicine to people.

“From our policy and our perspective, if these places are operating in a professional, safe manner — and obviously the criminal element of the sale of marijuana is illegal — and if there is no additional element that would cause us concern for public safety, then we use our discretion not to enforce certain drug laws,” he said.