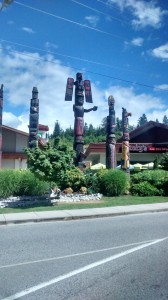 The original plan that day was to wake up and head to the market at Gibson’s Landing, but it was over by noon, and we only woke up at 11-ish (oops). So we decided not to waste any more time on this coast, and head to the Island ASAP. But I mixed up the schedule, so we found out that the next ferry was in 2 hours. We decided to go check out the Sechelt Artisan market in the meantime: 15 minutes and one stressful parking job later there it was.

We have purchased some local cucumbers (yummy!), beeswax lavender deodorant (smells yummy), and shoes for my cousin’s son (not yummy but cute). The time was tight, so we skipped the beach part and went straight to the ferry terminal. Ferry was still on the station, but because of the mechanical issues with the ramp, a backup one was utilized, which delayed the boarding by 30 minutes. Then, when it was finally our turn to board, there suddenly was no space left on the ferry, and it departed. No biggie, we are in the RV, so tonight we feast like kings. A little later another ferry shows up and we board. 40 minutes later, we loop around and board another ferry, to Nanaimo this time. $220 and 1.5 hours later we are on the island!

Since it was a little late, we went straight to the RV park, which was about 45 minutes away from the ferry. 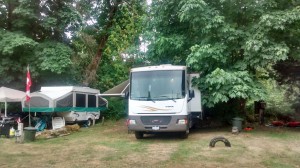 The park is in a cedar grove (I know, shocking). There are no dividers between the RV spots, except for the tree logs, and the spots are pretty snug to each other. Maybe I was spoiled by the previous parks, but I didn’t feel like there was anything besides the basic level of comfort.

There is, however, a kids playground and a water slide park on site, and a small creek running at the back.

Cedar Grove was probably the worst campground we have camped so far. And while it certainly was more developed than the Fraser Cove, but the sketchy management, backyard campground spot and the fact you need to pre-request tables made me rate this park at only 3/5.