For the past year I had taken an interest in the World politics, primarily the ones in the US. Be it as it may, they have an immense influence on the global monetary system; and the events occurring in the USA often have an impact on Canada.

With the currency wars that are going on (the 2015 stock market dip, devaluation of the Yuan, economic sanctions on Russia), with how much the US debt has risen in the past few years compared to all other years combined, and with the widely ignored climate change, it is apparent that the US needs a leader that will address these issues before the shit hits the fan.

The day before yesterday, there was Democratic Presidential Debate – one of the 6 that will take place preceding the 2016 Presidential Elections. Before that, I was only familiar with two of the candidates, Bernie Sanders and Hillary Clinton, and I was happy to learn more about other candidates.

The summary of this debate:

Lincoln Chaffee’s opening speech was a jittery; and he did not appear sincere. He focused on his experience in politics, and not on his platform, which only showed him as one of the little-known candidates who are trying to get their name out. And even though he had a lot of experience as a mayor, senator, and as a governor, he did not come across as a strong leader, and there was too much empty talk.

Jim Webb is a well-rounded, straightforward reasonable guy with principles, and a experience as a filmmaker, a published author, a teacher, and as a Senator. When I read about him on the Wikipedia, I found this:

“On November 28, 2006, at a White House reception for those newly elected to Congress, Webb did not choose to wait in the line to have his picture taken with the president, whom Webb often criticized during the campaign. The president approached Webb later and asked him, “How’s your boy?”, referring to Webb’s son, a Marine serving in Iraq. Webb replied “I’d like to get them out of Iraq, Mr. President.” Bush responded, “That’s not what I asked you. How’s your boy?”, Webb responded, “That’s between me and my boy, Mr. President.” [source]

Webb, in contrast with Chaffee, was a lot more confident and genuine. Some of his views, however (gun and international policies, for example) were too radical for my taste.

Another candidate, O’Malley, who is known for his beef with the NRA (National Rifle Association) and for signing a law that allows same-sex marriage in Maryland, gave a lot of generalized statements, but nothing concrete. I am still not convinced that he is not a robot. Also, it is important to note that O’Malley endorsed Hillary during her 2008 platform.

Next, my personal favourite spoke, the socialist democrat Senator Bernie Sanders. If you are not familiar with Bernie, you can watch this interview with Yahoo’s Katie Couric and this one on the O’Reilly factor (I hate Bill O’Reilly because he is an obnoxious goon, but that interview is gold). Unlike Hillary, Bernie has so far been consistent with his opinions, and he has more than enough experience in the Government. In his speech he focused on the real issues, he clearly marked his priorities; but most importantly, he was passionate, and spoke from the heart.

Bernie has the facts, he knows how to use them, and he is not afraid to talk about things a lot of politicians avoid (being largely funded by the corporations, for instance). He openly opposes the “Super PACs“, and most of his funding comes from the people, not corporations.

Then, lastly, Hillary presented her campaign. She was smug, prim, overly-confident, and her speech was pompous and really vague. She spoke a lot, but said very little. The end of Hillary’s introduction was something along the lines of “I will do everything that I can to close the income inequality and to make sure the rich pay their fair share of taxes.” Here is the list of the contributors to her campaign (amongst the largest ones are CitiGroup, Goldman Sachs, JPMorgan Chase and Morgan Stanley), and form an opinion whose interests she really may be representing.

The fun begins with the second portions, the concerns that the voters have about each of [the candidates.

The first question was:

“Plenty of politicians evolve on issues but even some democrats believe you change your positions based on political expediency. You are against same sex marriage, now you are for it; you defended President Obama’s immigration policies, now you are saying they are too harsh; you supported his trade deal dozens of times, you even called it the Gold Standard, now suddenly since last week you are against it, will you say anything to get elected?”

“Well, I have been very consistent…” – Hillary responds: “…but as most human beings I absorb new information, I do look at what’s happening…”

She either has no idea what is going on, or she really changes her opinions as she sees fit each time she speaks (I’m leaning towards the second one, because 1) I have a hard time believing a person in her position could really be this oblivious, and 2) here is a recent video from her campaign speeches, where she suddenly gains a Southern accent, so this gives me an idea of what kind of campaign she is running). I also watched the first half of the documentary about Hillary and her time in the White House (that was banned in the theaters), which brings an interesting perspective on her persona.

Here is a video of her saying that he does not support same-sex marriage back in 2000’s, and now look, her campaign logo is rainbow-colored! It is safe to say that at the age of 60 opinions of an individual are quite well-formed, and I have a hard time believing that she would fundamentally change her opinion and suddenly become so open-minded. This is just an example of what she is about, I encourage you watch the documentary to learn more.

What troubles me the most though, is the fact that the CNN poll on who won this debate on the day of showed Bernie leading with around 80% of the vote, but later the CNN took the poll off, and the day after presented it as Hillary won the debate.

Here is the screenshot of the vote not long before it was taken down. 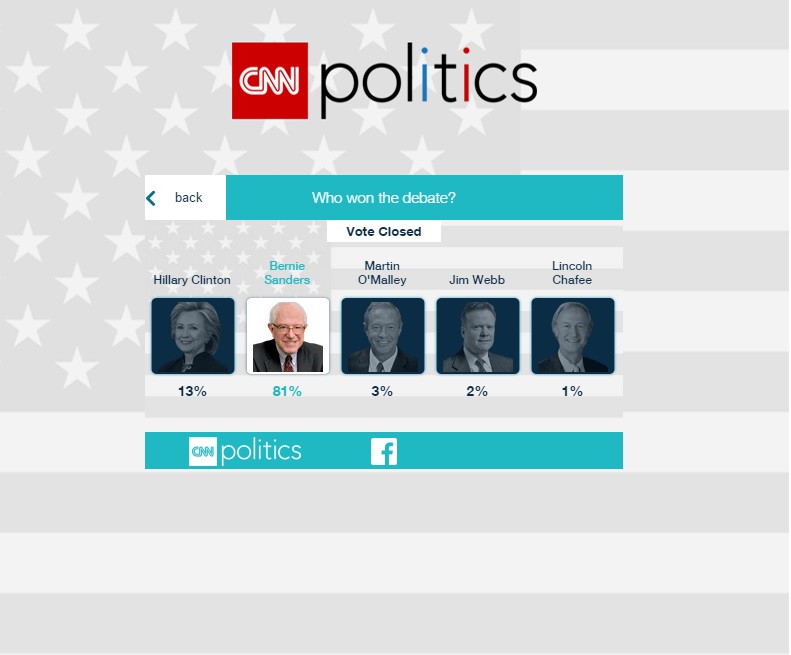 And then I learned:

CNN is owned by Time Warner.

She conveniently got a middle spot, the closing “power” position, and it is quite apparent that she is a candidate that the media and corporations are trying to shove down the voters’ throats, hoping that people would yet again be too lazy to think about picking a good candidate.

However, the fact that Bernie got the majority of a initial vote makes me think that there is hope, and that he may be able to win after all. I really hope that people would get out and vote, now that there finally is a candidate worth voting for, and Bernie is that candidate.