2014 was a busy year. I like lists, so I’ll make one for what good happened to me during the year:

The highlight of the year was me getting my PR status approved. After a year-something I have finally got a positive response from CIC.

The new step is to wait for my eligibility to becoming Canadian citizen, which is not happening for another 3 years (thanks, Harper).

I have long wanted to have a dog. We couldn’t have one, because my dad is allegedly allergic to dogs; so this January, after a few tweaks, Maria and I have adopted the sweetest pup, Lady.

4. Started eating a lot healthier. I began monitoring, and set a daily sodium intake of 1500 mg or less; and almost completely cut off junk foods. So far I have eaten at McDonalds just once last year (for the absence of a better option, and it was just the coffee and a muffin). I have also stopped eating sugary munchies everyday, and drinking carbonated drinks; switching completely onto tea, coconut water, or plain water from now on.

The goal is to completely cut off unhealthy foods; limiting meat to once a day; replacing my addiction to red meat with chicken and turkey; and stopping consuming processed foods at all.

5. Purchased domains and drafted a plan for an affiliate marketing project. The website is being worked on, but I am planning on adding the finishing touches and starting advertising it by the end of the next month.

6. Finally opened myself a mutual funds account, and will start purchasing e-series as soon as the conversion occurs.

The plan is to build a decent portfolio, and create an additional source of income. 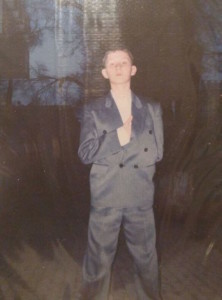 TIL that I was an Italian mobster in the first grade.