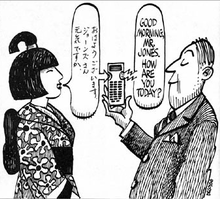 Today we have a guest post from Rehan Sajid of
web-translations.co.uk

We never cease to underestimate the world we live in. One of the biggest things we depreciate are people and their abilities. People from the East think that westerners are not homely, whereas people in the West think that people in the East of the world are not as progressive in their thoughts as they, in fact, are. Whatever the preconceptions are, the world is getting smaller and a smaller, and more people are communicating with each other – either indirectly or directly.

Misguided preconceptions are getting smaller and smaller, mainly due to technological advances in the form of the internet. With the internet more and more people are getting educated about foreign markets and the way people live in far flung corners of the world. They soon realise that not everyone in their country speaks the same language or interacts in the same way, but they have something in common – after all, they are all humans with the same zest for life and a better way of living (well, in most cases).

People who have a broad mind realise that there is so much culture and heritage in the world that it is foolish to ignore that. In most cases, these people like to travel to different parts of the world to experience these cultures. The internet has allowed different cultures to be more exposed to the different parts of the world. As most travellers will testify and people who are diligent that English is not spoken as much as some of us like to think.

In BRIC nations (which stands for Brazil, Russia, India and China) the percentage of spoken English is lower than 7% – a low amount when considering the population of these countries. It also should come as no surprise that these nations are amongst the the fastest economically growing countries throughout the world. Each have different language spoken as a majority – and English not being one of them.

The Need for Translations.
The internet has made this process a whole lot easier, and the barriers of entry to new markets are significantly reduced as all the information is present over the wonderful world of the web. For most businesses the biggest barrier to entry to a new country is the language. Big brands like Pepsi, Coke, Facebook, Google etc……all make huge efforts to ensure all languages are covered.
For this reason there is a need for a translator no matter where you are based. As long as you know at least two languages, you can work as translator from anywhere in the world; and the better if you travel, the more as you will pick up on nuances and local dialects. For example, if you knew French you could translate English to French for businesses who are not only looking to enter France, but also French speaking countries across the world, like the African French-speaking ex-colonies and Canada.
Free Tools Not Good Enough.
The reason why these translators are required on a continuous basis is to bridge a communication gap that is created when we deal with each other. What some businesses attempted to do previously was to use free language translator tools for large, complicated documents. This process however, has caused a lot of problems for many a business as the translations have not been adequate.

To become a translator is not as hard as other professions; however, your communication skills need to be fairly high, as your level of understanding of two languages needs to be grammatically correct. If you have studied a language in a University or a higher education establishment then you should be at an advantage over your others. Based on this language you will then be required to have a translator certification in order to gain an advantage.

A formal qualification just tells a translation agency who you may approach to be put on their list that you are of a high enough caliber to work for them. Some language are more in demand than others but it is worth noting that with globalization there is nearly a demand for all languages, obviously the locality of where the language is spoken depends on how much work may come your way but good reason to learn more languages.