There were 5 of us: four lads and one lady, travelling in two cars. The trip has started at 4.15 am, when I was woken up by a phone call, because I forgot to set the alarm (oh, me). Luckily, all my stuff was already packed from the night before, so it was only a matter of minutes to negotiate on the things taken, then bring them out the door in to the car. 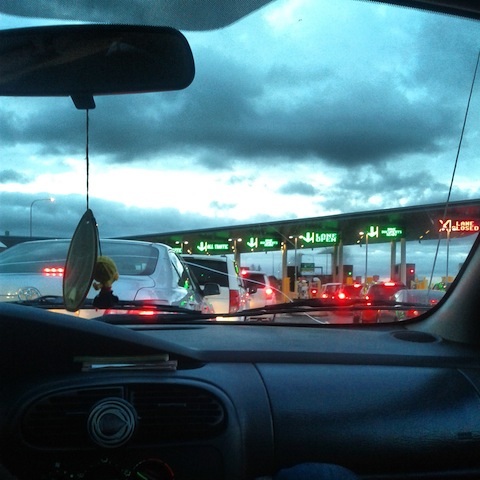 Waiting at the US border

We have made it to the border within an hour, and spent another hour waiting in line and getting our departure records (those who do not know, in addition to the US visa, you also need a $6 passport-sized piece of paper, which they will staple in your passport).

First we stopped at the casino in Tulalip, WA for an all-you-can-eat breakfast (about $12 IIRC), which was pretty damn good! I’ve had an omelette with shrimp, bacon and mushrooms, more bacon strips, and some fresh fruit, and a coffee. After that, we headed to the nearby Wal-Mart for the food and snacks. Overall, I found the most prices to be comparable to the Canadian prices (in $CAD equivalent, of course). The only difference was the presence of alcoholic beverages in the aisles. 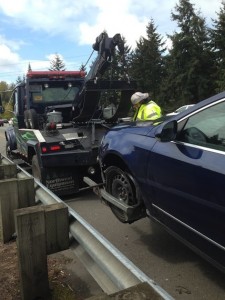 Once we got the food, we were en route to the coast. On the way the things got a little ugly: one of the cars had a blown tire (luckily, no one except for the car got hurt). As you know from the recent events I have obtained a BCAA  membership, so we called a tow truck, which was there in just under 30 minutes. The guy has offered to change the tire on the spot, but having no spares we went to a local tire shop. After a little of fiddling here and there we got the car back in about an hour, and were back on the road.

With the food break, car repair break, and getting semi-lost on the way, we’ve finally made it to the destination at around 9 pm. Needless to say, we did not get to surf that day, though on the other hand we got to travel a little outside the original route. We have set up the tents, and started  cooking steaks and veggies. At the campground there were two options: either getting a campsite for $22, or paying $40 for the yurt (pictured below). Unfortunately, all yurts were already booked. The campsite itself was pretty family oriented; though being mindful as we are, we had no noise complaints whatsoever.

Inside one of the yurts for rent 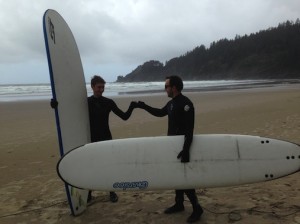 The night was clear, but in the morning we’ve had a little rain. Despite it, we went to the surf shop, rented the gear and went to the beach. Altogether, the surf board, the wet suit, the hood, gloves and the boots came to $44 USD. We got to the beach at about 1, and left completely exhausted by around 4.30. Man, did I enjoy it! I only managed to stand on the board a couple of times, but it certainly was plenty of fun to be in the ocean in April. 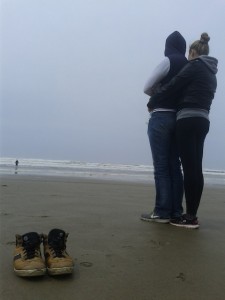 After surfing, we went for burgers at a local bar, got more food and returned to the campsite. We have decided to stay at the site regardless of the 70% chance of rain, and it paid off! There was a little drizzle in the morning, but it was nothing significant, or otherwise worrisome. Sunday morning we packed our stuff, took a final glance at the ocean, and off we went.

We have stopped in Seattle to catch a breath, and eat some dumplings. Then, even with the border delays, I was home, safe and sound, by about quarter after 12 at night. Voilà!